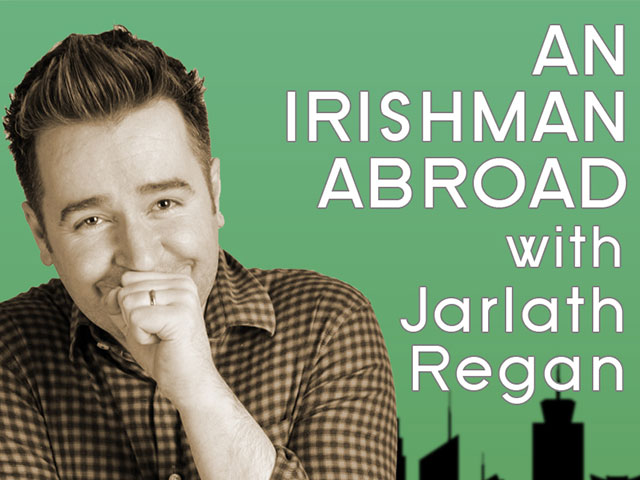 Jarlath Regan is an Irish comedian, writer, illustrator creator and host of the Irishman Abroad podcast.  Since the age of 24 he has made his living performing standup across Ireland, the UK and the rest of the world including the Edinburgh, Montreal, Chicago, Melbourne, New Zealand and Dubai Comedy Festivals. In 2013 he moved to London to perform standup. 6 months later he created the award winning Irishman Abroad podcast series.  The collection of in-depth, long-form interviews with will known Irish emigrants and people of Irish heritage has earned rave reviews from The Guardian, Telegraph and Irish Times, and has featured Hozier, Sharon Horgan, Brian O’Driscoll, Chris O’Dowd, Sir Terry Wogan, Glen Hansard, Aidan Gillen, Sonia O’Sullivan, Boy George, Dylan Moran, Lisa Hannigan, Graham Linehan and many many more. It is listened to by more than one million people worldwide. Jarlath has staged live episodes of the podcast at the Dublin Film Festival, Dublin Comedy Festival, Edinburgh Fringe, Cork International Film Festival, Body & Soul Festival, London Irish Comedy Festival as well as a residency at the Museum Of Comedy in London.

“Quite frankly, every single young person reading this should go download this podcast and listen to it every week for the rest of time.” – The Guardian